An Intro to What We're Building
at Seed 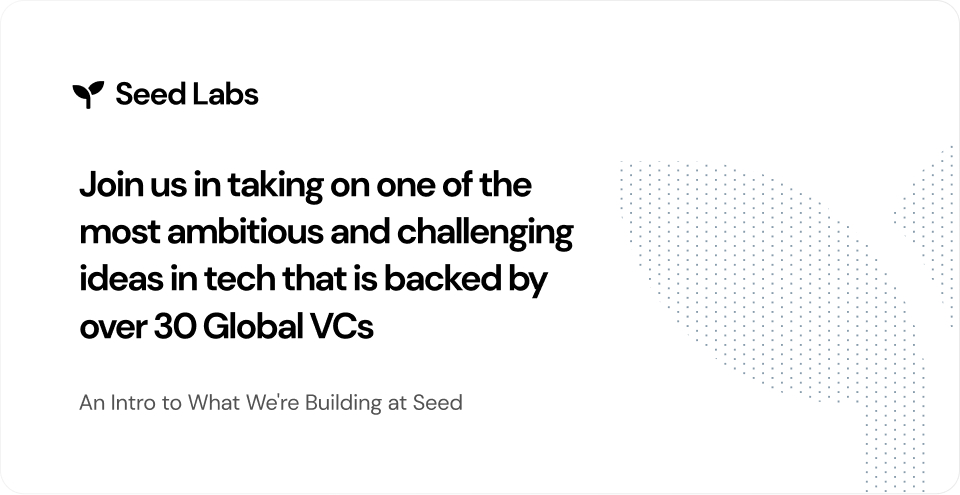 Firefly is a decentralised exhchange, meaning transactions happen peer-to-peer using consensus algorithm based systems and distributed ledger technology for data and record storage, replacing the execution and record-keeping functions of intermediaries. We're building largely on Typescript,React,Node.js,GolangandRust— we like our stack to be cutting edge ;)

We aim to bring open finance to a billion users by bridging the latency and liquidity of centralised finance with the composability, transparency, and permissionless innovations of decentralised finance. In just over a decade since their inception, digital assets have reached a capitalization of 2 trillion dollars, a fifth of the most treasured precious metal for millennia - gold. We believe this trend will continue to accelerate as decentralised finance becomes faster and more powerful, and also as traditional assets start to have digital representations. We're excited to be at the forefront of this effort of overtaking traditional finance by building a permissionless exchange that has the performance of centralised finance and the ability to bring any asset on-chain — and even create new markets altogether.

Crucially, the peer-to-peer nature of Firefly means that it never takes custody of traded assets, it simply facilitate trades between users. Since assets are never held in the exchange, Firefly doesn't carry the same custody risk of being hacked or of assets being frozen that platforms like Robinhood and Binance have. The distributed nature of Firefly's computing power also makes 'downtime' due to server failure virtually impossible—something that happens fairly regularly to traditional exchanges during extreme spikes in volume.

Yes, it's decentralized, but not just for the sake of it: decentralization provides the security and composability we value and the permissionless innovation that will continue to push the boundaries of what's doable. The Firefly experience is one of performance, possibility and seamlessness. It is low cost and low latency and features permissionless market creation and a single-minded focus on traders.

Firefly cuts out all intemediaries and directly connects the end user, allowing them to trade whatever they want. This could be one of many asset types — spot assets, perpetual swaps, or entirely new asset types. Users can trade equities, digital assets, commodites, and much more. We have seen a lot of our initial signups express interest in trading digital assets, and the infrastructure we've built will likely start as a non-custodial digital asset exchange. But it has been built to be an exchange for any kind of asset, and has the power to replace centralised exchanges like NASDAQ, Binance, and Robinhood.

If you're interested in joining us, please head over to our careers page!

Seed Labs ©️ is a startup focused on developing products for retail and institutional investing. Seed Labs's first product is commissioned for decentralized derivatives on commodities, stocks and digital assets through the use of blockchain technology.

We are building the world’s most
technologically robust fintech products.